Voices is the easiest and most efficient production service Richter Studio’s uses on a daily basis. 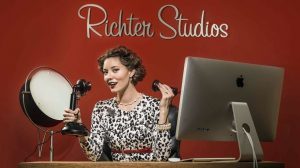 Richter Studios is a pioneer in the digital realms of cinema and photography. Since 1997, they have amassed over 3,000 video productions and hundreds of photo shoots. Headquartered in Chicago, the company is an award-winning production firm with a geographic reach that has spanned over 45 states and 12 countries. They work with a broad range of Fortune 500 firms, mid-sized businesses and start-ups, including Radio Flyer, Brunswick, DeVry University, and Cobra Electronics, to name just a few.

With a state-of-the-art studio, Richter Studios films or photographs projects at their Chicago location, or travel to clients across the United States and around the world.

Before Voices, CEO Jeremy Richter and his team had to source everything through local talent agencies. The whole process was very limiting and, at times, very frustrating.

“The entire process was very physical in that we had to listen to CDs with canned demos, make talent selections based on them, and then do an in-person audition. After the talent selection was made, we then had to come back in for the final recording as well. It was a very time-consuming, laborious process.”
Jeremy Richter, Founder and CEO, Richter Studios

“The need for better efficiencies and access to greater variety were paramount,” Jeremy recalls. “As a creative services firm, it’s very limiting to feature the same 5-6 voice talent for all your projects but that’s how it was for many years. The other thing was the speed in which we were able to complete projects. The traditional process of recording voice-overs was incredibly time consuming and our clients were beginning to shorten their deadline expectations. The Internet had a big influence on this type of thinking, so that’s the first place we turned to find better a better solution.”

Since 2010, the Chicago video production company has done hundreds of projects through Voices – over 180, to be exact.

This content has translated into hundreds of millions of online views for their clients. Richter Studios has sourced talent numbering in the hundreds and has created content featuring over a dozen languages through Voices.

Content has been created for some internationally well-known brands, which include the likes of: Bayliner for their “So Worth It” 60-second spot, where Brad Ziffer is the voice:

Office Depot’s “Before You Know It” video with voice talent Amy Weis:

Rick Riley voiced the No. 2 Restoration “Championships” Commercial for Pinehurst, the home of golf in America:

The biggest change in Richter Studios’ projects since joining forces with Voices has been how fast the team can now move. “The speed at which we receive auditions for our sample scripts is simply staggering,” Jeremy says. “Typically within an hour or two, we have 50-60 auditions waiting in our inbox. For fast-tracked projects, this is a serious boon to our workflow.” That means clients of Richter Studios can hear the potential voice for their brand in just a few short hours versus days or weeks. “This makes the whole process a lot more responsive and fun for everyone.”

Jeremy shares that from a cost-savings standpoint, the difference is “a tremendous figure.” What used to take his team many hours is now a simple, 30-40 minute exercise.

Beyond the speed factor, the films Jeremy and his team are creating for their clients are much more distinct because of the expanded creative options they now have through Voices. They now have access to not just to a greater talent pool, but a global one as well. Jeremy’s team frequently receives projects that involve foreign language requests. They’re able to pull those off for their clients in just a few short days after script approval.

“From a process standpoint, Voices has enabled us to finish what used to be considered complex projects in a week or less. A big part of that has to do with the professional and responsive talent that Voices has in its portfolio. Systems are only as great as the people powering them and Voices has an outstanding talent pool.”
Jeremy Richter, Founder and CEO, Richter Studios

“It’s not a sales pitch when I say that Voices is the easiest and most efficient production service we use on a daily basis.” Jeremy says.