Monster found the most efficient and affordable way to find the right voice for their projects. 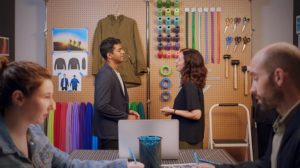 Monster is a global leader in connecting people with jobs, employers, and essential career advice, offering services in more than 40 countries. It is one of the most visited job sites in the USA – every minute on Monster’s website, 29 resumes are uploaded, 7,900 jobs are searched, and 2,800 jobs are viewed.

Kathryn Majike, Creative/UX Project Manager at Monster, simply wasn’t aware of an affordable way to source professional voice talent. Kathryn’s team was using a number of different companies to find their talent. Without a single place to source talent from, the Monster team spent most of their time digging through multiple databases instead of searching through one database, choosing a talent, and moving forward with their project in an efficient, timely way. Additionally, Kathryn found that using a handful of companies meant that it was difficult to build and maintain a relationship with each sales representative, which further restricted the process of sourcing voice over talent.

With another project coming down the pipe for the team, Kathryn felt that enough was enough. She knew that what everyone really needed was a wide variety of professional voice over talent, all in one place, with an account manager who Kathryn felt was a productive extension of her group.

Kathryn was working on creating an ad that would highlight one of Monster’s products in both the US and Canada. With affordability and access to professional voice talent in mind, she reached out to Voices to get started. The platform stood out as the place Monster could go to source all of their talent because of the number of voice actors on the site – it was clear that this was a one-stop-shop of sorts, and Kathryn was eager to put it to work.

After creating an account, Kathryn sent a finalized script to her account manager, who returned with multiple auditions shortly after.

From the shortlist of professionally curated auditions that matched the scope of the project, Kathryn’s team was able to select the voice talent they liked best. They then received the final recordings of the script in 48 hours.

It was realized that some changes were needed so that the script matched the visuals of the video. This was easy, too. Kathryn just sent the edits through her account manager, who was able to arrange everything directly with the talent on Kathryn’s behalf so that she could focus on completing the remaining aspects of the project. Updated voice files were back in Kathryn’s inbox within a matter of days.

“Voices provided great account management, which provided us with an efficient auditioning process and fast recording turnarounds. This helped us meet our deadlines and stay on budget.”
Kathryn Majike, Creative/UX Project Manager, Monster

Finally, with just one company to work with, Kathryn was able to build a strong relationship with her account manager, who knows and understands Monster’s goals. This new partnership means Kathryn can rely on her account manager to find the perfect voice for the brand in the most efficient way possible.