Sarah's success story is one of persistence, belief in one’s self, and the ability to enjoy the ride! 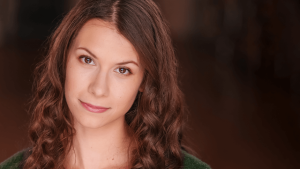 Sarah Kmiecik’s success story is one of persistence, belief in one’s self, and the ability to enjoy the ride of working in the voice over industry.

After 89 auditions, Sarah landed her first job and with it came the feeling of her persistence coming to fruition. “I was super excited because I knew that I had put in the work and it finally paid off,” she said. “I had a really great experience because the client was professional and easy to work with. Working with that client was straight-forward and made me feel comfortable and confident in my ability to further succeed.”

“When I’m auditioning with Voices, I’m really flexing that audition muscle because I’m doing so many a day.”
Sarah Kmiecik

Sarah employs a recommendation that we often give to talent: batch your auditions to do as many as you can in a day. The most successful voice actors are submitting seven auditions or more a day.

It’s no wonder she has been able to batch her auditions! “When I’m auditioning with Voices, I’m really flexing that audition muscle because I’m doing so many a day.” she says. The way she approaches auditions keeps her engaged and enjoying the process—a key element to success. “Honestly, my favorite part about being a voice actor is auditioning! When you approach a script, it’s kinda like doing a puzzle. You have to try and create the finished project in your head so you know what it is supposed to look and sound like,” Sarah shares.

A takeaway from Sarah’s story of consistent auditioning and appreciation of the journey is that voice actors earn more than just money in this line of work: they earn a sense of community and access to the brilliance of their peers.

The requirements and expectations of voice actors are evolving by the minute and voice actors are supporting one another as everyone works towards developing the in-demand skills clients are looking for. Sarah says if you find yourself auditioning again and again, good on you for being consistent, but it’s also a good idea to tap into some voice coaching to make sure you’re delivering on the characteristics clients are seeking. She says: “The work ebbs and flows, but if you feel like you are auditioning and auditioning and you haven’t booked anything in a long time, don’t be afraid to get some coaching. I’ve been in a voice over class where I sat alongside two of my past coaches- everybody can benefit from some feedback.”

Voice Acting as a Career and Lifestyle

You can tell when someone has invested in themselves when their passion and skills translate into a career they love. What’s great news for newcomers to the freelance voice over space is that that investment doesn’t need to be your retirement nest egg.

“It allows me so much freedom and that is something I will never take for granted.”
Sarak Kmiecik

What voice actors can learn from Sarah’s story is that a career in voice over is more about focusing on developing vocal qualities and being persistent with auditioning for jobs than it is about having high-end recording gear.

While there is some required equipment when getting started in voice over, most of the bells and whistles can be purchased later. Sarah recommends getting a pop filter from the very beginning, though. And, of course, a microphone. “Don’t worry about buying a super expensive microphone right away, just something better than your iPhone voice memos.”

Sarah says the time freedom of working from home is her favourite thing about a career in voice over. This work from home lifestyle is something a lot of voice actors express is hugely special to them about their line of work, and Sarah echoes the message of her peers, “Not only is voice acting something I’m passionate about, but I absolutely love working from home. It allows me so much freedom and that is something I will never take for granted.”

Sarah receives 5 star reviews from her clients—another sign of a person in the right line of work! She has been praised for being easy to work with, responsive, and delivering files much faster than expected.

Many voice over jobs have come her way since her 89-audition-stretch into her first gig. You can hear her voice narrating Planetarium shows, in radio commercials for P&G products, Burt’s Bees, Starbucks, and more!

With a portfolio of predominantly commercial work, Sarah has welcomed a new project that will help to diversify her experiences: a guided yoga and meditation practice. And in true Sarah fashion, she loves the challenge!

Listen to Sarah’s demo reel above to hear a friendly, warm, inviting, and confident voice that might just be perfect for your next voice over project!

Learn More About Sarah
Contact her or listen to more of her work on her profile.
View Sarah's Profile