2015 Voice Over Trends in Advertising

The entire media industry is undergoing a significant change, and voice-over is at the heart of that change.

The rapid advancement of internet technology and, more recently, the shift from desktop to mobile computing has allowed consumers to choose how and where they will be informed, educated, and entertained. In this same way, the film and television industries face challenges in the digital marketplace.

As a result, producers, advertisers, and marketers are increasingly unwilling to invest in expensive outside recording studios. The improvement in digital recording capabilities over the past five years has made recording more affordable and easier for producers and creative directors.

Accelerating this willingness to switch from large outside recording studios to collaborating with independents are tighter budgets, shortened project timelines, and a growing network of talent who are ready to collaborate.

Increasingly, the voice-over procurement process tends to start and end online. As we outlined in our 2013 report on the industry, with the advent of the Internet, opportunities of global proportion have descended on business professionals, including those in the voice-over and ad industries. Using this new medium, talent are able to communicate, audition, and deliver their audio to business clients at the speed of their technical capabilities and the Internet.

Antonio Danova’s IBSWorld Industry Report 51224: Audio Production Studios in the US from August 2012 states that of the registered recording studios, only 8% are wholly dedicated to commercial spot production, further evidence that the vast majority of commercials are now produced not in large recording studios, but, rather, by professionally-trained, independent owners who operate small home-based studios.

Such a shift within the advertising industry is a positive move that is aligned with how the voice-over marketplace has evolved over the past decade. We are all operating within a 100-year-old system that is facing revolutionary changes as market needs and preferences change to accommodate a new way of doing things.

Voices has explored just how much these changes are affecting the business of voice-over and how it applies to the advertising industry. This has been done through an industry survey that sampled the insights from experts at every level in the advertising market.

This report will guide advertisers and content producers in their future work by revealing the insights of their peers on the shift in the advertising industry, how the traditional processes of finding talent are being impacted by technology and new services on the market, as well as what is affecting decisions in this new era.

Appreciating the Need for a Voice Over

Though omnipresent in modern life, voice-over is rarely considered, unless it’s really bad or incredibly good. It’s become such a part of our everyday experiences that we can tend to take the power of the human voice for granted. Advertisers do not. In fact, they appreciate the influence a good voice-over can have.

Think of the times you’ve heard voices announcing stops on public transportation, narration of explainer videos on YouTube or the voice telling you stories while you work out at the gym. Voice-over is everywhere. 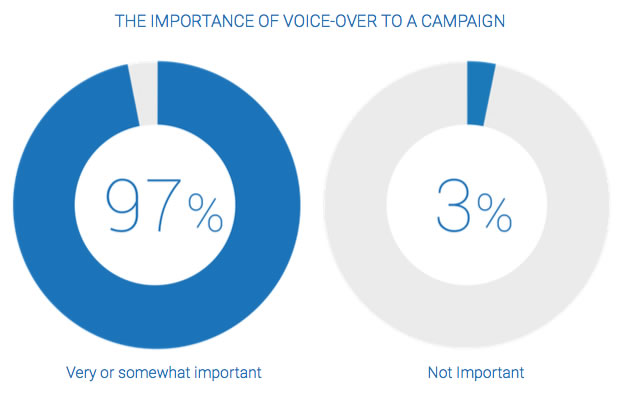 Even as the industry shifts into a more digital, inexpensive, readily-accessible landscape, voice is still important to campaigns.

How Advertisers Work with Voice-Over

With our working population’s movement to freelance gigs, smaller budgets, and a taste for streamlined methods, advertisers are still sourcing voice-over for client brands rather than their own, with 54% stating that this is how they are working in 2015. 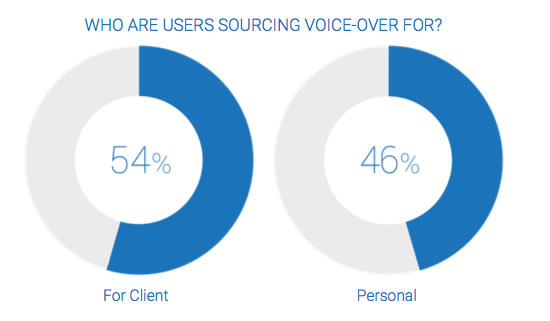 As well, contrary to what the shift in the industry would suggest, quality is winning out over cost-savings. Those who are responsible for selecting the voice for a project are focusing on the performance and audio quality, rather than the price tag. Just under 90% of professionals are adding voice-over to their projects based on the performance of the talent, followed by 71% who are focused on the quality of the audio recording itself, and then by the 68% who select based on cost.

The market has expanded. What used to be a handful of applications for voice that went to the main five to ten voice talent in a specific geographic location has grown to hundreds of applications that require voice-over from professionals all over the world. Such a boom, coupled with the freelance culture of the internet, has resulted in hundreds of thousands of talent now finding work. Such an open market has meant that costs have shifted, too.

As eMarketer’s May 2011 report by Nicole Perrin and contributors Lisa E. Phillips and Mitch Winkels, Traditional Media: Dollars and Attention Shift to Digital, outlines, ad spending is on a slow rebound after plunging by 18.5% in 2009. eMarketer estimates spending was up 2.1% in 2010, to $127.2 billion, and will hover under $130 billion through 2015.

This modest movement can be attributed to the increased focus on online and mobile ad spending.

MAGNA GLOBAL’s Advertising Forecast: The Global Advertising Market Hovering Over the “Cliffs” from 2013 for the next few years got it right; in 2015, as marketers switch budgets from traditional media to digital media in an effort to follow their customers, they are also taking advantage of a media mix that comes at a lower cost.

Consumers are spending more time on the internet and using mobile devices, and advertisers are following that trend not only in the content that they are creating, but, also, in the process of creating it. Online services are having an impact on ad spend, especially in the aspects of the build of an ad, such as design and voice-over, a component that, though becoming less expensive due to the efficiency of technology and new services, is still viewed as a significant part of projects as they become more rich for the public’s technological consumption of various forms of media.

Surveys indicate that an overwhelming number of people are turning to online marketplaces to satisfy their need for quality professionals, efficient turnaround times, increased creative control, and a savings on the fees and costs associated with studios and agents who, with greater regularity, were contracted in the past.

So, how exactly are advertisers acquiring voices for their campaigns in this new landscape? 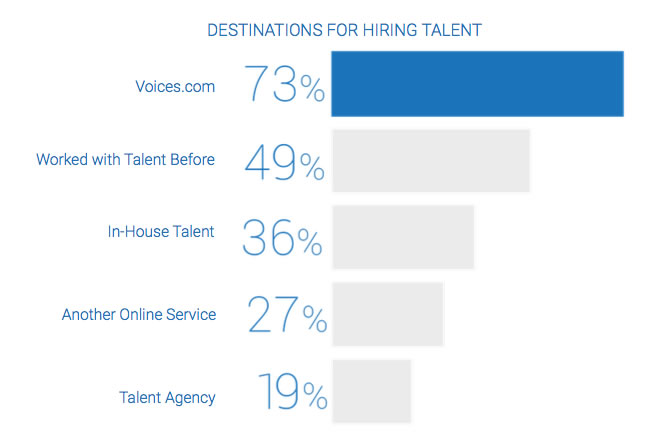 Of this group, 73% of marketers and advertisers are using Voices, and nearly 28% are utilizing other similar web services. As well, in the study, 49% of industry professionals stated that they are using talent that they have hired before; having initially met many of those voice talent through an online marketplace.

Under 20% are still using traditional talent agencies, and 36% are tapping in-house talent that they have on hand. The incongruity between the new needs of advertisers catering to an increasingly savvy crowd and what the traditional processes offer has been the driving force behind the steady move to online services like Voices.

The main challenges that are driving brands and agencies to the web to hire for their projects range from tighter deadlines to availability of quality talent. The most interesting insight was that 42% are moving their project builds online because old methods and options can not meet more specific needs. Budget and timeline restrictions, each at 24%, follow as the next biggest challenges faced in the market. The availability of talent has also been an issue, according to 11% of professionals in this study.

Notable are the 43% who are interested in only selecting a voice based on the immediate availability of the talent, and the 35% who are looking for a voice that they will be able to hire over and over again in the future. The technical requirements of the project are still important, but less than the other variables. It’s something that about 15% of those involved in the study cited as an aspect that will influence their pick for the project.

Under 20% are still using traditional talent agencies, and 36% are tapping in-house talent that they have on hand.

The incongruity between the new needs of advertisers catering to an increasingly savvy crowd and what the traditional processes offer have been the driving force behind the steady move to online services like Voices.

The main challenges that are driving brands and agencies to the web to hire for their projects range from tighter deadlines to availability of quality talent outside the online professional memberships. The most interesting insight was that 42% are moving their project builds online because old methods and options can not meet more specific needs. Budget and timeline restrictions, each at 24%, follow as the next biggest challenges faced in the market. The availability of talent has also been an issue, according to 11% of professionals in this study.

The biggest benefit advertisers and marketers are seeing to their campaign build processes are not the cost-savings – which 37% do admit to being a perk – but, rather, how much more streamlined, efficient, and straightforward the business of hiring a voice talent can be. This is compared to the older, more traditional methods of locating voice talent within the advertising industry, according to 74% of professionals in the study. 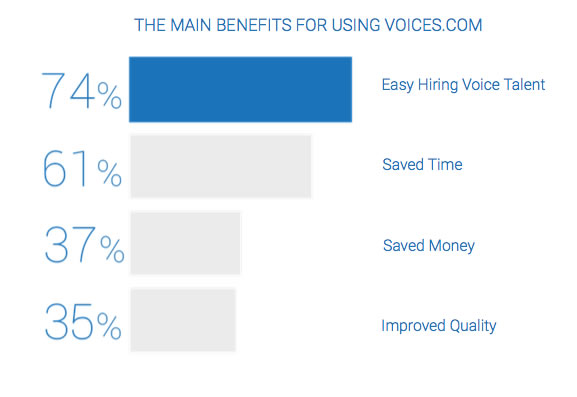 Nearly 61% indicate time saved to be the next biggest benefit of utilizing online services. Time is no longer wasted going back and forth between talent, agents, and studios; these pros are able to focus on other complex aspects of the campaign, an increasingly critical advantage in the competitive landscape of advertising in the digital age. An added bonus to sourcing voice-over work in an online marketplace, 35% of study participants revealed, is the improved quality of audio production available. When there are multiple, highly-skilled talent available and bidding for a job, project coordinators are no longer limited to just those in their geographical location; there are hundreds of thousands of incredible talent now eager to provide high-quality audio for any given project from all over the world, a factor that also has its advantages for global marketing strategies.

An Industry On The Move

As with most industries, new technology has been the biggest catalyst for changes within the advertising world, namely how technology and voice-over are intersecting with advertising and marketing campaigns. New service options, such as Voices, have revolutionized how producers are locating, auditioning, and paying for voice-over while still receiving high-quality audio offerings, competitive rates, and accessibility to international talent online.

The study also revealed how integral the internet has become in the creation, curation, and consumption of various types of media. Traditional methods the ad industry has been known for in agencies’ and professionals’ campaign workflows has shifted to more modern, streamlined processes. The old way of doing things, such as securing voice-over for a project, is inefficient when trying to stand out amongst increased competition for eyes and dollars. The lag between what has been done and what needs to get done has driven more pros to finding their own way to meet their project needs, which includes moving their processes to the online services and freelance spaces.