Rogers relies on the high-level support in casting and coordination of projects provided by Voices. 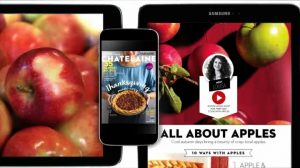 Texture by Next Issue is bringing the world’s greatest magazines to life on the digital device of your choice. Next Issue Media, the start-up company behind the Next Issue App, is a joint venture formed by five leading North American publishers – Rogers, Condé Nast, Hearst, Meredith, and Time Inc.

Texture’s Apps for iPad® and Android™ bring the world’s most popular magazines to life with digital-only extras, such as videos, bonus photography, interactive features, live web links, and more.

Matt Kissick, Associate Creative Director at Rogers Communications, and his team normally worked with a few local non-union voice talent agencies. Voices was suggested by a colleague who recently joined the organization.

“When working in the non-union realm, the talent pool is often limited, in both number and quality. It’s important to expand your scope to include multiple agencies with diverse talent rosters.”
Matt Kissick, Associate Creative Director at Rogers Communications

Rogers needed to produce a couple of 30 second national spots for “Texture by Next Issue,” for both radio and television. With such an project on their hands, the Canadian media company decided to tap Voices for high-level support in casting and coordinating all aspects to do with voice-over.

Voices found the right voice for the job, and we were able to conduct a recording session quite quickly.

Rogers’ assigned Voices account manager sent back the auditions for this project within one business day of receiving the request. Of the 143 custom auditions submitted for the project, voice-over talent Mike O’Brian was selected as the voice for Texture’s spots.

This project was completed within one week from the initial casting, but it took less than one day from the point of talent selection.

“It was similar to other VO agency experiences we’ve had, but the addition of a dedicated representative was a nice touch. Customer service was also excellent, and the talent we chose was easy to work with.”
Matt Kissick, Associate Creative Director at Rogers Communications

Spots for the Texture ads were seen nationwide. The app is available on iPad, iPhone, Android tablets and Windows 8.

This project was one of Rogers’ first jobs with Voices and, since then, more than 10 other projects have been completed.