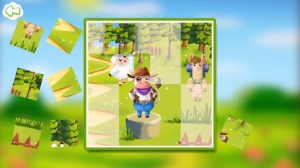 Mayadem specializes in game-based education apps for children. As tech-savvy children learn to use smartphones and tablets at increasingly early ages, it has become Mayadem’s goal to use the opportunity to educate toddlers while they use such devices.

To achieve this goal, Mayadem has created environments for constant exploration through their apps, teaching children ages two and up shapes, animals, colors, and more, all while expanding their vocabulary. Based in Turkey, Mayadem works with voice over actors from around the world to dub their games into different languages in an effort to reach an international audience.

Mayadem had targeted their local geography exclusively, producing a handful of games that are dubbed solely in Turkish. These games focus on strengthening a number of cognitive abilities for toddlers through game-based learning. With big plans for their new project, The Little Ones, set to be a larger project than past games, they wanted to tap into the global market, which meant producing games in different languages.

While Mayadem didn’t have any trouble finding Turkish voice actors in Turkey, with a global audience targeted for The Little Ones, Mayadem had trouble finding native English speakers locally. Mayadem was looking to cast for 16 different characters whose voices were suitable for children. This led the team to look outside of the local talent pool to find voice actors whose native language was English, and who knew the jargon that would make the narration sound natural.

“For our first global release we needed English speaking voice over talent with American accents and kind, soft voices suitable for a child audience. We discovered some very good talent on the site, but we couldn’t scan the entire list. At that point, our Voices account manager stepped in to help us narrow things down. That helped a lot.”
Can Uyanik, Video Director, Mayadem

To find voice actors for 16 different characters for their 12 The Little Ones games, Can Uyanik, Video Director at Mayadem, found plenty of talented voice actors on Voices, even using keywords to find specific actors that may be a good fit for the games. While he found some good talent on the platform’s database, he said that there was no way he could sift through the thousands of voice actors who may be interested in auditioning.

Can shared the different character personas with his Voices account manager. Through the platform’s Full Service option, the account manager helped Can by compiling a list of voice actors based on each character they were looking to cast, and then sourced and curated the best auditions to choose from, saving Can time by hand selecting the voice actors that would be a good fit for the scope of his project.

Mayadem now had dozens of English speaking talent ready to work for them, making Can’s job of sourcing voice talent a bit easier.

After choosing the talent that would play each character for the games, Can said the actors sent over clear, professional recordings for Mayadem to use. Can added that some of the talent even voiced a couple different versions of the script in case they wanted to use an alternative.

“Before launching games on a global scale with The Little Ones, we were working with local agencies for Turkish dubbing. When we began working with Voices, the process of finding voice actors took much less time.”
Can Uyanik, Video Director, Mayadem

The games took six months to complete and will be Mayadem’s first global launch, a giant step for the Turkish video game producer, necessary to reach an international audience and grow as a company.