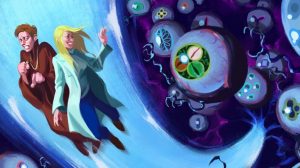 Magus Elgar is the passion project of film editor and voice actor Kennedy Phillips, an audio drama inspired by the works of Terry Pratchett (Discworld) that took nearly two years to complete. The story follows two scientists and two magi on an adventure through a magical world called Hearth as they search for scientific tools that have taken on magical properties. About 80% of the entire 11-episode audio drama is produced with sound effects recorded in Kennedy’s studio.

As a film editor and Foley artist, Kennedy Phillips knows his way around a studio. Having worked on several short films and other productions, Kennedy understands how top-quality audio can take a movie – or in this case, a podcast – to another level.

For Magus Elgar, Kennedy built a world of whimsy, magic, and comedy, a project that required voice actors for a dozen characters. Though Kennedy likely had all the tools at his disposal to produce the podcast himself, he was looking to connect with fresh, professional performers that he hadn’t worked with before.

“Normally for a given project, I work with my own team to source voice over, often recording it myself or getting a friend or two to help. This time, because I was working on something a bit more ambitious than what I’ve done in the past, I decided to work with professional actors. However, with my experience working in audition studios, I didn’t want to spend hours working with five or six actors, only to realize that they were unsuitable for the part.”
Kennedy Phillips, Creator, Magus Elgar

As the creator, Kennedy envisioned each character being very emotive and able to develop the “theater of the mind” that is common in audio dramas. Seeking out energetic and creative voice actors whose passion shone through in their auditions was his goal. Finding all of that in one place was his challenge.

A Google search for voice actors gave Kennedy an idea of the many online platforms that he could post a job and get auditions through. After researching each option, he was most impressed with the prolific talent on Voices. He made an account and got to work finding his characters.

When posting the jobs, Kennedy made sure to be very specific with what his vision for the roles were. Drawing inspiration from characters in Dr. Who, Disney’s The Hunchback of Notre Dame, Star Trek, and Ghostbusters, he wanted wizards that were wise and cautious, magi that were dramatic and free-spirited, and a villain who was arrogant and unscrupulous.

“There were so many good performances and I had to spend hours every night questioning whether I was making the right decision on talent. I had provided a massive document of details and descriptions I wanted for my actors. Boy, did it come back in spades. Nearly all of my actors had an incredible passion for the project and wanted to go above and beyond what I had on paper.”
Kennedy Phillips, Creator, Magus Elgar

With the custom auditions rolling in, not only was Kennedy amazed at the quality of talent that wanted the part, he was also stunned at how many people were interested in the project. In the end, he had 800 auditions to choose from, a good problem to have considering his early concerns about wasting time auditioning unsuitable talent.

Once Kennedy hired his twelve top picks, he was able to direct the voice actors remotely to ensure each character had the same timbre and tone as the auditions that he fell in love with. After several weeks of recording sessions and producing Foley art, the magical world that he had envisioned was ready to become a reality.

Through determination and attention to detail, Kennedy was able to find professional voice talent who were creative, energetic, and fit the roles perfectly. Now, Magus Elgar’s 11-episodes are filled with brilliant characters, and can be enjoyed by audiences all over the world who share Kennedy’s enthusiasm for science fiction and fantasy.